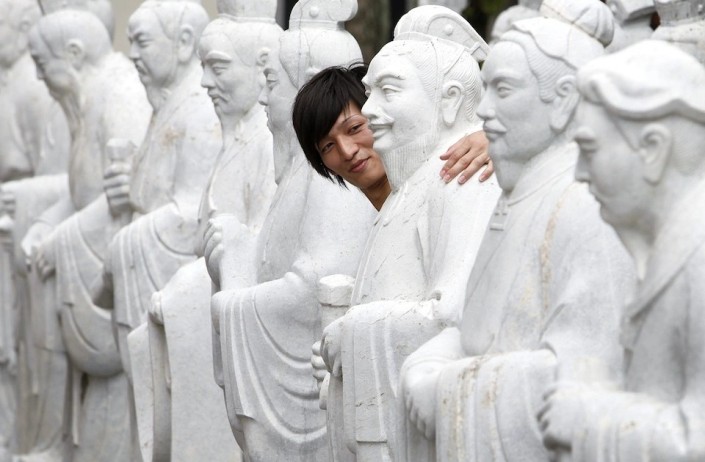 Although Confucius describes himself as a preserver of culture and places significant emphasis on the importance of learning, since learning and devotion for sons are considered key aspects to maintaining the dao (道 – a teaching or skill formula that is key to achieving self-perfection and world transformation), there is no discussion on rationality or logical reasoning in any of the Confucian texts. Commentator A. C. Graham has noted that along with the absence of a theory of reasoning, Confucius generally puts a low premium on thinking when compared to learning. In the modern world, the relationship between thinking and learning are often associated with one another: to learn any new theory or concept, one has to be able to think. That is, to acquire knowledge by discussing, comparing, and contrasting to test how and whether the new information fits in line with already established theories and concepts. The difference between thinking and learning, Graham argues, occurs when we define learning as that involving acquiring knowledge by committing something to memory and being able to recite it when needed, whereas thinking is the act of questioning, testing, and criticising information before accepting it as acquired knowledge.

For Chi-Ming (2017), the Confucian emphasis on hierarchy and harmony in contrast to critical thinking and rationalism has promoted submission and conformity in Chinese society. A review of recent psychological research indicates that people in China are dominated by authority-minded ways of thinking, which means that they are more willing to accept people at a senior level as arbiters of truth or morality and are likely to adopt non-confrontational approaches to conflict resolution (Shi & Feng, 2010; Ng, 2010). As Hall and Ames (1995) put it, one would not expect to read in the works of a classical Chinese [Confucian] scholar anything like Aristotle’s statement, “I love my teacher, Plato, but I love truth more”, for such a declaration would be seen as a form of self-assertiveness which has the potential to threaten social harmony. This raises questions as to whether Confucianism is inherently opposed to critical rationalism or, as some scholars put forward, it entails it.

What is critical rationalism?

Austrian-British philosopher and professor Karl Popper (1966) put forward a formula for defining critical rationalism as listening to critical arguments and learning from one’s mistakes. This involves admitting that you may be wrong, and that the other person may be right, and with effort to investigate, taking part in inquiry to get nearer to the truth by distinguishing between falsity and reality. Popper considers criticism, or the act of refuting evidence by testing information for contradictions and discrepancies, to be an important part of learning from one’s mistakes and getting nearer to the truth. Without it, one can fall into the trap of defending a mistaken belief and appealing to unsound arguments.

For example, accepting an argument simply because it is advanced by those in authority is erroneous as these arguments may not be related to the truth, or may be advanced by people who claim that they are authorities when they are not. By this standard, it is unacceptable if a teacher is mistaken in making the claim that Australia is part of Africa and the students unquestionably accept the teacher’s claim because he is in a position of authority. Likewise, pro athletes pushing for home loans are likely false authorities as consumers do not know if the athletes have used or use home loans at all, and it can be assumed that the athlete was successful without using the product in the first place. The importance of criticism here comes from the fact that power is inextricably linked to knowledge. Michel Foucault (1977) pointed out that throughout history, knowledge was intertwined with forms of power and domination. Those in power have the resources and influence to determine what is accepted knowledge to justify their positions of authority. In many cases, statements can be dismissed and not even considered not because they are thought to be false, but because it is not clear for those in power what it would mean for those statements to be considered true or false. One only has to look at the example of Galileo discovering that the earth revolves around the sun, and the Vatican’s response that saw him sentenced to indefinite imprisonment until his death in 1642, to see how power and knowledge interacted to restrict scientific discovery.

Although people in positions of authority can help make sense of vast and complex theories and evidence, as courtrooms continue to rely on psychologists and forensic authorities in trials, the perspectives put forward by these professionals should be taken as resources for understanding information, rather than as a final say on debated issues. Criticism, in this sense, can also be used to defend against the fallacy of democracy, which claims that popular ideas are necessarily right, and dogmatism, where one may be unwilling to consider an opponent’s argument because of the assumption that those who disagree with you are biased, while your beliefs remain objective and correct.

Critical rationalism has significant implications for politics and education. Politically, it is a rejection of authoritarianism and any form of governance that rejects freedom of thought and critical inquiry. The key concepts here are rational and reflective, since both suggest going beyond mere acceptance of what others say one should believe. It necessarily requires opposition and alternative viewpoints and is supportive of citizen engagement. In education, critical thinking is about developing intellectual and moral virtues, including epistemic humility (recognition that one’s views may be incorrect), sincerity in the formation of belief, open-mindedness, fairness, and autonomy in reasoning (see Kim, 2003). Without these aspects, reasoning can be easily distorted to support unwarranted conclusions.

How critical rationalism differs from Confucianism

If Confucianism values learning and not thinking (and if the two can be implicitly contrasted as suggested), then it follows that Confucius’ philosophy is at odds with contemporary education and critical rationalism. Learning without thinking is likely to involve processes of blind accumulation of information and the memorization and retention of ideas. Without inquiry, this is likely to lead to the acceptance of false ideas, prejudice, and ideology that serves those in power. In chapter 1, book VII of the Analects, Confucius states that he is only a transmitter rather than an innovator, looking to antiquity to solve the problems of his day. The idea is that knowledge is accumulated from watching, listening to, and reading from past ideas that are believed to hold ancient wisdom that can be adapted and applied. Though Confucianism highlights specific virtues that should be transmitted, without thorough knowledge of past information and its contexts, the past can be simply accepted because it comes from unquestionable authority, making criticism impossible.

Furthermore, whereas critical rationalism seeks to establish democracy and rule of law, Confucianism does not necessarily uphold either a democratic society nor protect the freedom of people. The Confucian idea about the effectiveness of teaching and learning, as revealed in The Documents (Shang shu 尚書), which states that everyone can become a Yao, Shun or Yu (all are legendary model rulers in ancient China), reflects a preference towards the power of education over rationalism, and the development of an undemocratic government that is based on filiality, benevolence, and the ruling class. While critical rationalism argues that criticism is the best means of establishing truth, for Confucianism, criticism is at best seen as an effective way of realizing benevolence, which is considered the ultimate goal of learning and achieving harmony. The outcome of critical discussion here is not aimed towards truth, but stimulating conversation that leads to moral effectiveness, which requires one to always be loyal and trustworthy in discourse (Knoblock & Zhang, 1999).

For many Confucian scholars, the discovery of things as a form of thinking and learning can be compatible with Confucius’ admiration of antiquity and does not necessarily involve uncritically accepting and holding on to past knowledge. Despite the many differences between the two schools of thought, Confucianism and critical rationalism do share some significant similarities in theory. For instance, in line with critical rationalist values, Confucianism values epistemic modesty, courtesy to opponents, and respect for critical inquiry, although forbidden subjects and tabooed names are not to be discussed (Knoblock & Zhang, 1999). The Xunzi states that problems should be solved by rational and impartial inquiry rather than with emotions since desires and aversions are considered to be flaws of the mind’s operation.

It should be noted that while the Confucian tendency to draw from the past is often criticised as being conservative, it can also be an effective way of establishing critical thought. An emphasis on the past reflects a concern for continuity that can be used to shape the future instead of seeking to retain the past unchanged. In Book III, Chapter 14 of the Analects, Confucius says that the Zhou dynasty was built on the successes of two previous ruling dynasties: “How splendid was its pattern! And we follow the Zhou.” The past is seen as a useful resource for teaching moral lessons, and any change should be enacted by reflecting on previous practices and traditions. Rather than attack all forms of old thought, as was done under Chairman Mao during the Cultural Revolution, critical thinking can align with examining past approaches.

Finally, a key aspect of Confucian living that resembles critical rationalism is the importance of communication in rational discussion. The concept of wisdom (zhi, 智) in Confucianism is associated with thinking and is linked to inquiry. The character 智 indicates not only the ‘mouth’ (kou, 口) and ‘saying’ (yue 曰), which highlights the importance of communication in accumulating knowledge, but also that of the ‘arrow’ (shi 矢), which is made up of the characters for ‘people’ (ren 人), suggesting that wisdom entails a community of inquirers instead of knowing on one’s own (Ames, 2011). The idea is that learning and thinking is a social process and while thinking can take place on one’s own, self-reflection is only one aspect of learning from one’s mistakes and getting nearer to the truth. In the Analects Book VI, chapter 27, Confucius notes that once a cultivated person studies broadly in patterns in line with li, “he will never turn his back on them”, which demonstrates that practising li involves promoting social communication and order to achieve truth, rationalism, and harmony.

Although Confucianism does not align perfectly with Popper’s modern conception of critical rationalism, the two schools of thought are not completely in opposition. Without dismissing the claims put forward by Hall and Ames (1987), which state that Confucianism prioritizes aesthetic over logical ordering, and the emphasis on harmony reinforces affirmative versus critical thinking, the importance of wisdom in Confucianism, which involves conversing in an open-minded and logical manner, along with communicative critical discussion can be seen as aspects of the philosophy that promote a non-quarrelsome, studiousness, and impartial approach to inquiry. Taking Confucius’ lesson of learning from the past, Confucian ideology itself can be used in the present by negotiating what aspects of the philosophy align with modern values over those that do not. For some, such an approach is the only way to apply Confucian philosophy to solve contemporary problems, while for others using Confucian texts in different contexts to support arguments that may have not been relevant during Confucius’ time reveals the plurality and imprecision of meaning in interpreting ancient philosophy. Whether Confucian philosophy promotes or runs counter to critical rationalism is therefore dependent on how the reader chooses to interpret Confucian texts.